There comes a time in every kid’s life when eating becomes difficult and brushing before bed is nearly impossible. My younger brother, Dominic, has gone through this the last week and the wait is finally over, all thanks to Claire.

I heard arguing from another room coming from the younger set of siblings, which is normal so I paid no heed.

Cries of pain suddenly came from a small six-year-old, and he came running into the kitchen with his hand over his mouth, which is ever a good sign. Claire came running in behind him yelling “I’m sorry Dominic!” We looked at Claire and asked her what happened. She quickly started to tell the story almost inaudibly, all I caught out of it was, Dominic took  something from her and she wanted it back then she says “I just touched his tooth and he started to cry” as Dominic says though sobbing and tears “Claire punched my tooth out!”

So that is the story of Dominic’s first lost tooth, which came out with either a touch or the old-onesie-twosie (to those who watched Popeye the Sailorman) depending on who you talk to.

I finally lost my LAST BABY TOOTH.   Well I didn’t loose it exactly, I went to the dentist for a check up and my dentist said that she would take it out it was so wiggly.  I could have taken it out myself  but it was in a funny spot and the adult tooth was coming out on top of it, and would eventually be over the baby tooth.   It really hurt when they took my tooth our they some numbing spray on it, but I do not think the spray helped.   Landon and I both did not have any cavities.   Hip Hip Hooray.

Joseph lost his first tooth today!!  Joseph is very happy.  He is especially happy because he is the youngest of the family to lose a tooth, and because I am putting it on my blog.  But there are still two more kids to lose teeth.   And he only found out his tooth was wiggly two or three days ago.  I have had loose teeth in for months before I could pull it out. Man, losing teeth is one thing I am not going to miss when I am done.  And he hasn’t even mentioned the tooth fairy…. hmmm. Bye. 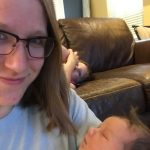